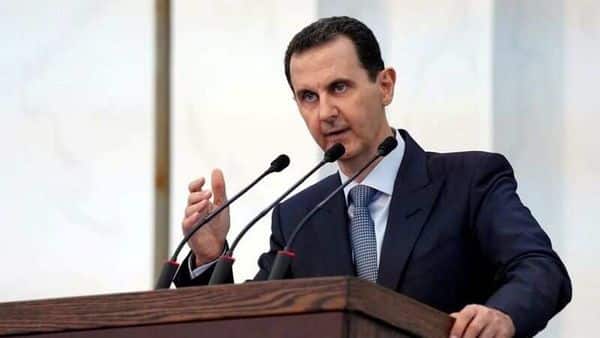 Even as the swearing-in ceremony was held at the presidential palace, attended by clergymen, lawmakers, political figures, army officers and other supporters, activists reported that government shelling in the last rebel enclave in the northwest killed at least six people, including three children and their grandmother.

Assad’s re-election in May in a landslide was never in doubt. It was described by the West and Syria’s opposition as illegitimate and a sham.

In power since 2000, his new term starts with a country still devastated by war and sliding deeper into a worsening economic crisis. Accused by European and the U.S. governments for most of the war’s atrocities, Assad has faced widening sanctions that also target his close aides and state institutions.

Assad said in his inaugural speech that all his concerns are about “liberating the land and confronting the economic and social ramifications of the war.”

“Making things better is possible, certainly possible,” he said, speaking for over an hour. “War and siege didn’t close the doors completely … we can get through them. We just have to know how to.”

The U.N. estimates that more than 80% of Syrians live under the poverty line. The Syrian currency has been losing value and basic services and resources are scarce or offered at exorbitant parallel market prices. Fighting has largely subsided, but parts of Syria remain out of government-control and foreign troops and militias are deployed in different parts of the country.

Assad claimed that Syrian money stuck in Lebanese banks — which he estimated at between $40-60 billion — was a bigger challenge than the sanctions. Lebanon is facing its own economic crisis. That deprives Syria of funds, he said, and pressures the Syrian pound, now trading at around 3,000 to the dollar, compared to 47 pounds to the dollar at the start of the war.

Assad is supported by Iran and Russia, which sent troops and assistance that have propped him up throughout the war. U.N.-led talks to end the conflict have failed to make any progress.

Buoyed by military victories, Assad called on Syrians in exile to return home, saying they were “misled by the illusion” of a rebellion against his rule.

After the swearing-in, Assad met with visiting Chinese Foreign Minister Wang Yi who arrived in Damascus earlier Saturday, the most senior Chinese official to visit Damascus in years. Assad thanked China for its support.

Nearly half of Syria’s pre-war population is either displaced or living in neighboring countries or Europe as refugees. The war has left nearly half a million killed, tens of thousands missing and devastated the infrastructure.

The conflict that began in 2011 started after the government cracked down on peaceful protests, turning the opposition against the decades-long rule of the Assad family into an armed rebellion. Assad took over in 2000 after the death of his father Hafez, who seized power in 1970 in a bloodless military coup.

The May election — the second during the 10-year civil war — had no independent monitors. Assad won 95.1% of the vote with symbolic competition from two candidates.

U.S. and European officials said the vote violated U.N. resolutions in place to resolve the conflict and was unrepresentative of all Syrians.

Despite a cease-fire deal in place since March 2020, government shells on Saturday targeted the northwestern village of Serjeh in Idlib province, according to rescue workers and the Syrian Observatory for Human Rights, a war monitor with activists on the ground. Among the six killed was also a volunteer with the White Helmets, the civil defense in opposition areas.

Violence has been rising in recent weeks in the enclave as government troops edge toward restoring control of the territory, home to nearly 4 million people.

The truce was negotiated between Turkey, which supports Syria’s opposition and has troops deployed in the area, and Russia, the Syrian government’s main backer. At the time, it halted a crushing Russian-backed government air and ground campaign aimed at retaking the region.

UNICEF said 512 children were verified killed in fighting in Syria last year, the majority in the northwest where there are 1.7 million vulnerable children, many of whom have fled violence several times.