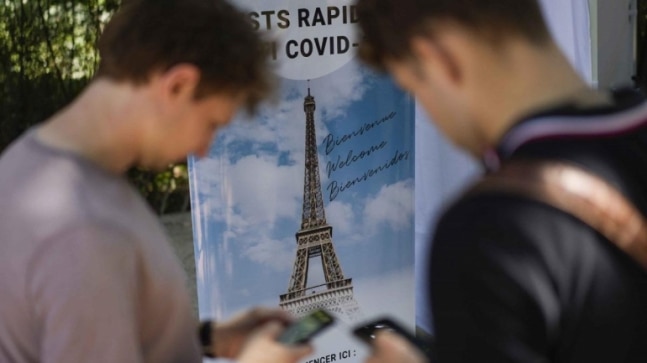 Visitors now need a special COVID-19 pass to ride up the Eiffel Tower or visit French museums or movie theaters, the first step in a new campaign against what the government calls a “stratospheric” rise in delta variant infections.

As the new rule came into effect Wednesday, tourists who came to the Paris landmark unprepared lined up for quick virus tests at the site. To get the pandemic pass, people must show they are either fully vaccinated, have tested negative for the coronavirus or recovered from COVID-19.

“The world is facing a new wave, and we must act,” Prime Minister Jean Castex said.

But people opposed to vaccines and being asked to present passes showing their immunity status are growing increasingly vocal. A group of protesters attending an anti-pass demonstration in the Alpine city of Chambery broke away and entered the town hall, removing a portrait of French President Emmanuel Macron from a wall and taking it away.

“The city of Chambery condemns this intrusion with the greatest firmness,” the local government said in a statement.

Attitudes toward the requirement were mixed.

“I wanted to come here with my mom so I had to take to the test to be able to travel,” said Juan Truque, an accountant visiting from Miami, who is not vaccinated. “They are forcing you to wear face masks and do similar kinds of things that are some kind of impositions .. to me that are violations to your freedom.”

Johnny Nielsen, a Danish tourist traveling with his wife and two children, said, “In Denmark, you need the pass everywhere.” So while he questioned the usefulness of the French rules, he said that didn’t make them reconsider the family’s travel plans.

Meanwhile, Macron wants to expand the COVID pass requirement to all French restaurants and many other areas of public life, as well as requiring that all health workers get vaccine shots. The lower house of parliament on Wednesday noisily debated a bill that would allow those mandates.

The government wants to rush the bill through as soon as possible despite the resistance in some quarters. More than 100,000 people protested the measures around France over the weekend, and the prime minister said Wednesday the government will seek approval from the Constitutional Court, which will also take time.

Already the government had to delay plans to require teenagers to use the passes starting next month, amid criticism from parents, restaurant owners and others. The government wants the pass to apply to everyone age 12 and over and will launch vaccination campaigns in middle schools and high schools starting in September, Castex said.

France’s daily infections dropped sharply in the spring but have shot up again over the past two weeks. Some regions are re-imposing virus restrictions. The government is worried that pressure will grow on hospitals again in the coming weeks.

France has registered more than 111,000 virus-related deaths. Overall 46% of the population is fully vaccinated.