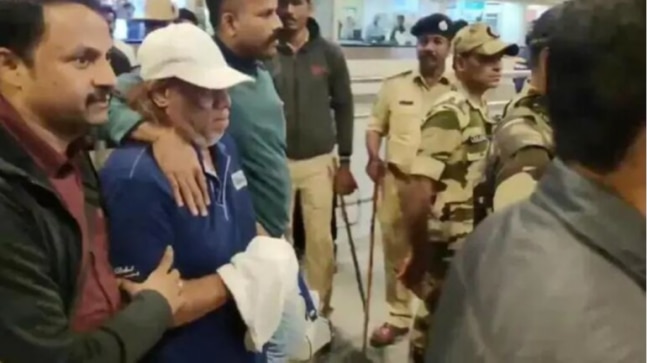 Gujarat police took custody of gangster Ravi Pujari from a jail in Bengaluru on Monday in connection with a 2017 shooting case. The Ahmedabad Crime Branch on Monday took the custody of gangster Ravi Pujari from a Bengaluru jail. (Photo: India Today)

The Ahmedabad Crime Branch on Monday took the custody of gangster Ravi Pujari from a Bengaluru jail in connection with a 2017 shooting case, in which a municipal councillor of Borsad town of Anand district in Gujarat was attacked allegedly at his behest, officials said.

Around 20 criminal cases, including of extortion and attempt to murder, were registered against Pujari in Gujarat alone, said Chaitanya Mandlik, a senior police official.

Of these, the Ahmedabad Crime Branch is investigating 14 cases, he said.

Pujari was lodged in a jail in Bengaluru following his extradition to India from Senegal last year.

“We had sought his custody to investigate his role in the 2017 shooting case in Borsad town,” said Mr Mandlik.

Another official said a court in Bengaluru had remanded Pujari into the custody of the crime branch for 30 days. He added that Pujari will be produced before a magistrate in Borsad in the coming days.

The incident happened on January 13, 2017, when three rounds were fired at independent councillor of Borsad municipality Pragnesh Patel from a point blank range in Borsad by two assailants, who were later arrested by the Gujarat police along with a third accomplice.

Mr Patel, who was injured in the attack, eventually recovered. Pujari had taken the responsibility of the attack.

Incidentally, a few days after Mr Patel was attacked, Congress MLA from Anklav in Anand district Amit Chavda, who is now the Gujarat Congress president, filed a complaint claiming Pujari had threatened him over the phone.

previousHC orders CBI probe in IT Dept’s claim against authenticity of email to assessee
next‘Attempt to defame India’: Government pushes back as fresh allegations of snooping emerge | India News